Discover the natural beauty and captivating heritage of Vancouver

Inhabited originally by the indigenous Chinook people, and later established as a British trading outpost on the banks of the Columbia River—not to mention a key stop on Lewis and Clark’s historic expedition—the Vancouver area is one of the Pacific Northwest’s true cultural gems. Reasons to move here include abundant recreation and natural beauty, a rich heritage and close proximity to the greater Portland area. 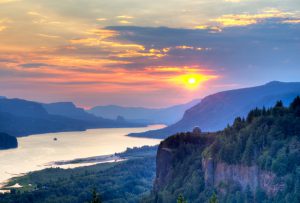 The nation’s fourth-largest river by volume, the Columbia River has always been at the core of Vancouver’s identity, functioning as an economic driver, a recreational treasure and a direct connection to Portland via the I-5 and I-205 bridges. There are many ways to enjoy the water, including river boat cruises, walks along the Waterfront Renaissance Trail and a trip to the scenic Columbia River Gorge. The city is also working on an expansive Waterfront Park project, with planned businesses, dining, entertainment and a cable-stay pier suspended over the river.

Boasting 190 acres alongside Vancouver Lake, Vancouver Lake Regional Park has something for everyone: a relaxing day on the beach, sand volleyball, fun on the water (swimming, kayaking, windsurfing, etc.), bird-watching, mountain views, picnics and BBQs.

A short drive from the city, this spectacular 5,300-acre U.S. Fish & Wildlife refuge is a must-see. Ridgefield National Wildlife Refuge is home to a variety of habitats, including forests, wetlands and grasslands. Among the wildlife you might see are river otters, the dusky Canada goose and the Columbian white-tailed deer.

A National Historic Site offering a first-rate education of the area’s roots, Fort Vancouver is located on the actual site of the British Hudson’s Bay Company’s fur trading outpost on the banks of the Columbia River. It’s also home to the Pearson Air Museum and the US Army’s Vancouver Barracks.

Operated by the century-old Clark County Historical Society, this heralded museum features rotating and semi-permanent exhibits that delve into the rich history of Clark County. The Clark County Historical Museum’s collection dates all the way back to the 1200s, including Native American artifacts, archival material on statehood and territorial history, and an exhaustive research library. The museum also hosts history walking tours, a speaking series and more.

This multifaceted downtown park is the oldest public square in the state, and serves as a year-round destination for recreation and as a venue for music, festivals and more. Special events at Esther Short Park include the 3 Days of Aloha festival, the Recycled Arts Festival, summer concerts and the Vancouver Farmers Market.

We’ve already mentioned Esther Short Park, but downtown has much more to offer, like the Vancouver Arts District, teeming with public art; popular breweries; great food and shopping on Main Street; and the historic Kiggins Theatre.

Get your shop on at artsy boutiques, stroll historic neighborhoods or enjoy a refreshment at one of the cafes, breweries or food trucks that contribute to Uptown Village’s flavorful vibe.

Moving to the Vancouver Area

Affectionately referred to as The Couve by locals, Vancouver is many things to its residents: a natural playground, a historic treasure and a thriving metro area teeming with industry, culture and exceptional dining. If you’re looking to move here, we hope you’ll stop by one of our new home communities in the area.

Ready to start your new home search? Search communities in and around Vancouver, Washington.

Get to know Richmond American’s homes and communities!
Join our email list and be the first to know about events and new locations near you.