Books to Enjoy This Season 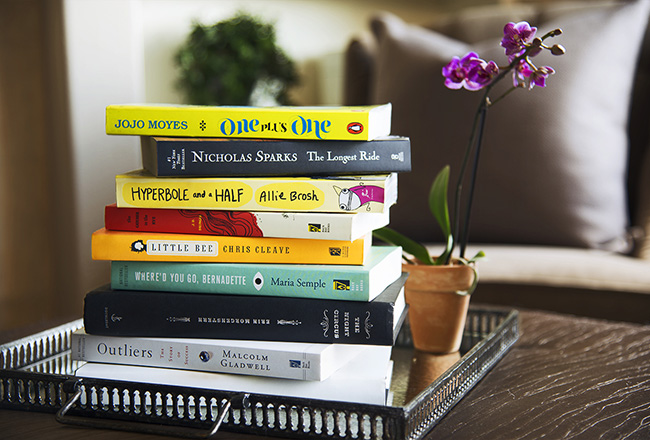 These excellent books are sure to help you get lost in a story, learn something or both!

Little Bee is no beach read. The novel encourages readers to evaluate the true distinction between right and wrong. The two main characters are a Nigerian orphan and British tourist who have nothing in common on the surface. They both show their humanity when put to the test.

If you’re seeking thought-provoking non-fiction, Malcolm Gladwell is the author for you. Gladwell is skilled in taking seemingly ordinary situations and pointing out the uniquely necessary factors that create them. Outliers teaches readers about the makings of success. You’ll learn the unexpected trait that almost all professional athletes share and how the Beatles became a world-wide sensation. Best of all, Gladwell provides useful tools for anyone hoping to become a success.

Hyperbole and a Half by Allie Brosh

If you haven’t tried reading a graphic novel, Hyperbole and a Half is an excellent place to start. Allie Brosh will have you laughing out loud with her astute observations and goofy stories (the visual depiction of how to tell if your dog is intelligent can’t be missed!). But, beneath the humor, Brosh’s honest approach to her struggle with mental health issues is both relatable and refreshing.

The Night Circus by Erin Morgenstern

Erin Morgenstern brings readers into a magical world in The Night Circus. The only thing better than the characters is the world Morgenstern creates for them. According to the author’s website, film rights to the book have been purchased by Summit Entertainment. This is good news for readers who are seeking a way to further immerse themselves in this magical creation.

The Catcher in the Rye by J.D. Salinger

Classics are considered classic for a reason. If you missed Catcher in the Rye during high school or are ready for a refresher, it’s worth diving in. Getting into Holden Caulfield’s head can feel disorienting, entertaining, and even confusing. Wait until his lack of logic starts to seem reasonable, and then you’ll really know you’ve become immersed in the novel.

One Plus One by Jojo Moyes

Jojo Moyes has the unique ability to write many books that are completely different from one another. One Plus One takes the reader on an entertaining and heart-felt journey through the eyes of Jess. Jess has a good heart and an unfortunate tendency to land in difficult situations. You’ll root for Jess from beginning to end and be amazed by her tenacity and sense of humor. When you’ve finished the novel, you’re likely to head straight to the bookstore to pick up everything else Jojo Moyes has written.

The Longest Ride by Nicholas Sparks

Nicholas Sparks is known for famous love stories, but the author does not actually consider himself to be a romance novelist. Sparks aims to take his readers on a journey of every human emotion. He wants every story to be a complete illustration of hope, love, heartbreak, pain and everything in between. Sparks certainly achieves this goal in The Longest Ride. The story includes many admirable characters as well as flashbacks and an unexpected ending. You don’t want to miss it. Be sure to read the book before watching the film.

Told from a number of perspectives, you won’t want to put this book down. Just when it seems nothing more shocking can happen, you turn the page and your jaw drops. Where’d You Go, Bernadette is illustrated through the eyes of multiple characters and in the format of letters, emails, narrative and even faxes. The most interesting aspect of this novel is not being certain who to root for. The antagonist can suddenly become an object of sympathy while the protagonist’s behavior seems questionable. This book is definitely worth your time.

12 Hot Neighborhoods to Watch This Summer

Father’s Day Gifts for the Home