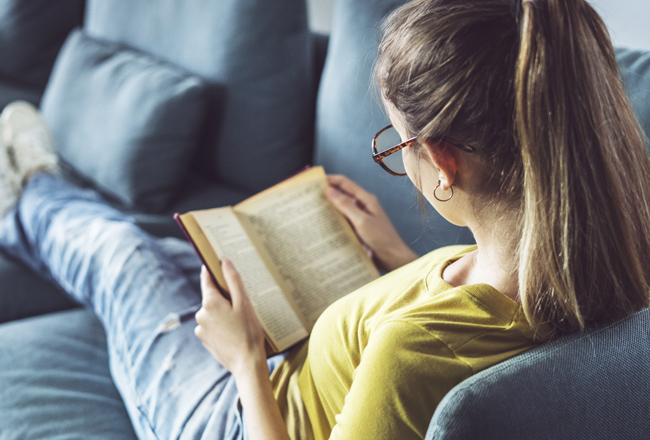 Ready to fall into a good book? Whether you enjoy fiction or nonfiction, sci-fi or suspense, we’ve got you covered this sweater season!

So, change into your favorite flannel pjs, grab a pumpkin spice latte (don’t forget the whipped cream!) and settle down with one of these exciting reads that have racked up rave reviews in recent years:

Educated: A Memoir by Tara Westover

If you have yet to read this moving memoir, which was named one of the “10 Best Books of 2018” by the New York Times, now is your chance! In this inspiring coming-of-age tale, a woman with no formal education prior to age 17 overcomes her non-traditional upbringing in a survivalist family in rural Idaho and pursues higher learning, eventually earning a PhD from Cambridge University.

Fans of contemporary YA fiction will fall for this poignant tale of a young woman on the cusp of adulthood. As she works to unravel a tragic town mystery, she learns that things are not always as they seem and discovers that in life, some risks are worth taking.

The Alice Network by Kate Quinn

A female spy recruited to France’s Alice Network during World War I and an American socialite several years her junior form an unlikely friendship as they embark on a mission to uncover the truth, regardless of where it leads. This historical story of bravery and redemption, which spans from 1915 to 1949 and is rooted in the real-life Alice Network, is equal parts inspiring and heartrending.

A meteorite crashes into earth causing a climate cataclysm that will render the planet inhospitable for humans. Now, the International Aerospace Coalition must pick up the pace in its race to colonize space, and one woman discovers her drive to become the first female astronaut. This impressive work of alternative history won the 2019 Hugo and Nebula Awards for best novel!

The Turn of the Key by Ruth Ware

In the mood for something dark, twisty and utterly unputdownable? Well, the bestselling author that gave us The Woman in Cabin 10 and The Lying Game has done it again. Is live-in nanny Rowan Caine really responsible for the murder of her young charge? You’ll have to read the chilling book to find out!

Ready to put your gourmet kitchen to good use? Add this culinary master class (which has been adapted into a Netflix series) to the top of your reading list! Award-winning chef and author Samin Norsat helps aspiring cooks of all ages and ability levels master the four elements featured in the book’s straightforward title—salt, fat, acid and heat—so they can cook with confidence and prepare truly delicious dishes with ease.

5 Reasons to Become a Homeowner

The Importance of Home Staging

Protecting Your Floors During the Holidays

7 Different Ways to Cook a Turkey