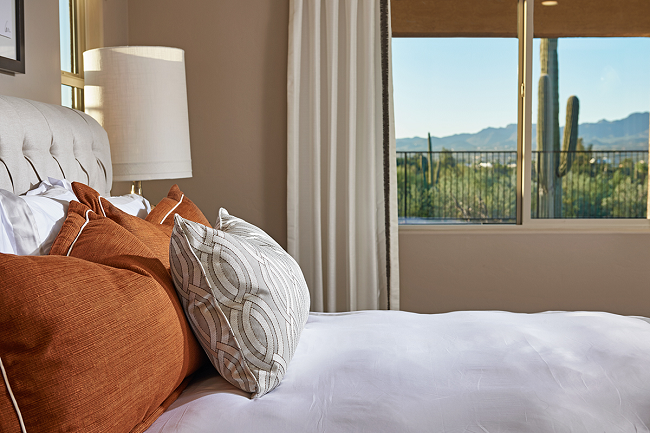 Warm, sunny days and cool, comfortable nights make any outdoor activity in Tucson delightful. The area enjoys an average of 350 days of sunshine per year, consistently low humidity and average winter temperatures of 53.2° F. That, combined with its affordability, opportunities for adult education and access to high-quality healthcare earned Tucson a #4 spot on the “10 best places to retire in the U.S.” (The Wall Street Journal’s MarketWatch, 2012) and in CNNMoney’s “25 Best Places to Retire.”

At 8% below the national cost of living index, Tucson is considered to be one of the most affordable places to live in the Sunbelt.

Home prices: A median home price of $175,000—also well below the national average—is one of the many reasons Tucson was ranked #1 on Realtor.com’s “Top 10 markets to invest in.” The other reasons? Job growth, an 8.19% drop in real estate owned properties and a 3.03% year-over-year increase in median house list prices as of February 2012. It’s no wonder that homes are selling 12% faster than they were last year.

According to TREO (Tucson Regional Economic Opportunities—now Sun Corridor, Inc.), Tucson is expanding in the alternative energy, aerospace/defense and clean manufacturing fields. The region’s bioscience sector has also defied the recession economy, with employment growth of 7.4% from 2009 to 2010, and more expected in the future.

Public sector: The University of Arizona, one of the top 20 public research universities in the nation, is the largest public employer in Tucson. It’s responsible for over 10,400 jobs, attracts roughly 39,000 students and brings almost half a billion dollars in research and development funding to the area.

Military: Davis-Monthan Air Force Base is the third-largest employer in the Tucson area. In 2011, it directly employed nearly 10,000 military and civilian personnel, indirectly supported over 4,500 more and circulated approximately $1.6 billion into the local economy (see figures). The base was honored with the 2012 Commander-in-Chief’s Award for Installation Excellence, and will receive $1 million for quality-of-life improvements. The US Army Intelligence Center and Fort Huachuca are also major contributors to the Tucson economy, employing over 6,200 residents.

Assigned to Davis-Monthan AFB? Browse new homes minutes from base »

Like most metropolitan areas, Tucson has a number of smaller towns within its area of influence. These Pima County communities are an integral part of life in the Tucson area.

Marana: Northwest of Tucson, the city of Marana is making a bid to become the “Recreation Capital of Arizona.” With 145 acres of parkland, hiking and biking trails through the scenic Tortolita Mountains and world-class golf courses, Marana is well on its way. The city is already home to a PGA championship and part of the El Tour de Tucson, a bicycle race that draws athletes from around the globe. Browse new homes in Marana, AZ »