Blending rustic charm and cosmopolitan flair, Austin is a unique and exciting city that’s quickly gaining a reputation as one of the very best places to live in the United States. The capital of the Lone Star State is known by several nicknames—all of which serve to demonstrate a unique element of the dynamic metropolis.

Having earned a place among the 10 largest cities in the nation, with a population that’s grown by 28% since 2010, Austin has famously become one of the country’s hottest real estate markets in recent years. And with everything that “The ATX” has to offer, it’s easy to see why!

In addition to being nicknamed the “Live Music Capital of the World” as a result of its abundance of highly regarded performance venues, Austin is also known as the “Athens of the South” in recognition of the significant cultural and educational influence it yields. Home to one of the country’s largest universities, Austin boasts a thriving arts scene and hosts numerous festivals, conferences and large-scale events every year—including the internationally renowned South By Southwest (SXSW) festival.

Outdoor recreation is also popular in the “City of the Violet Crown“—a nickname attributed in part to the city’s breathtaking sunsets. Austin’s favorable climate allows for residents to enjoy the fresh air year round. In addition to hiking, running, golfing and cycling, Austinites are able to partake in several water-based activities at the city’s various swimming holes and lakes.

“Silicon Hills” is yet another nickname for Austin—a reference to both the undulating landscape of the city’s west side as well as the prevalence of high-tech companies in the area. Several major companies have relocated their corporate offices to Metro Austin in recent years, including a good number from California. Companies with offices in the area include Amazon, Apple, Cisco, Dell, eBay, Facebook/Meta, Google, IBM, Indeed, Intel, PayPal, Texas Instruments, TikTok, VMWare and more.

All these companies need employees and employees need a place to live! If you have a client searching in the Austin housing market, we have great news for you—our vibrant communities of Seasons at Carillon and Seasons at Calumet are both currently open for sales.

Located in the nearby suburbs of Jarrell and Manor, these communities both showcase an impressive roster of floor plans from Richmond American’s popular Seasons™ Collection—designed to put homeownership within reach for a variety of buyers. Offering the designer details and open layouts today’s homebuyers are seeking, the beautiful new homes in these inviting new neighborhoods are must-sees for house hunters in Texas’ capital city.

Interested in selling new homes at either of these exciting new additions to the Austin housing market? Create a RichmondAmerican.com account now! You’ll have a chance to register your clients, protecting your commission for 30 days at all our communities. For more information, contact a New Home Specialist at 888.996.3060.

When searching for homes to show, it helps to speak with a local. Find out which neighborhoods have dog parks, ranch floor plans, RV garages—whatever is on your clients’ wish list! 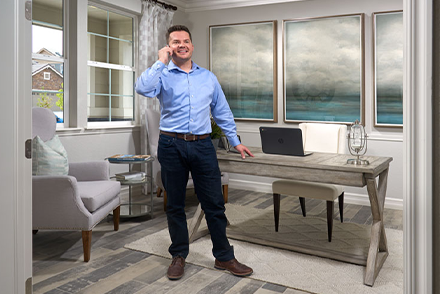